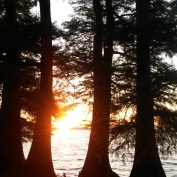 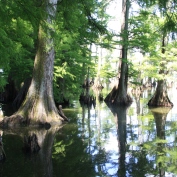 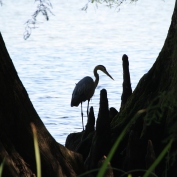 Reelfoot State park can be found in the northwest corner of Tennessee. It is relatively close to the Mississippi River and the borders of Kentucky and Missouri.  The large lake (15,000 acres) was created by the 1811-1812 earthquakes that caused a temporary redirection of the Mississippi River resulting in the Reelfoot Lake. All camp sites are water and electric but do not offer sewer hookups. There is a dumping station. We were disappointed to find a camp office only for registration. There is no camp store. They do sell ice for $2/bag using the honor system. They, however, do not sell firewood. Advertisements in the showerhouse promoted locals who sold firewood nearby. Reservations can be made by phone until 9:00 p.m. 7 days a week. 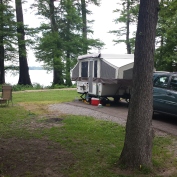 For the most part, the appearance of Reelfoot campground was maintained. Camp hosts keep the grounds mowed and trimmed. There were some flower beds within the park. Weeds were minimal. The roads and the camping sites were paved. Each campsite consisted of a cement picnic table, fire ring, and charcoal grill. The fire ring was located on the left side of the campsite and the picnic table was on the right side. We found this to be an awkward arrangement for a campsite. Many of the sites were shaded with mature trees, however, there were some open sites for the sun lovers. It seemed that most sites were level. Lakefront sites offered a beautiful view of Reelfoot Lake with Cypress trees on the water’s edge. We noticed a lot of ducks and squirrels in the area.

Rating:  (One to five lanterns with five being the highest)

The main attraction near Reelfoot is the lake itself. It is a fishermen’s paradise. It must be noted that you must have a Tennessee fishing license as well as a Reelfoot permit. For one day of fishing for a non-resident it costs $11. There are boat rentals in the areas near the campground. Because of the many tree stumps protruding from the lake, this is neither a tubing nor water skiing type of lake. Most people boating on the lake were using simple Jon boats.

Beyond the lake itself, we did not find much to do in the nearby towns of Tiptonville or Union City. However, the Discovery Park of America is located in Union City and is great opportunity for kids and families. There are multiple exhibits within the park. We did not go this museum; however, our camping neighbors brought their grandson and enjoyed it. More information for this park can be found at http://www.discoveryparkofamerica.com/ Mom and pop restaurants could be found throughout the Reelfoot region. We ate in a restaurant adjacent to the campground, which was part of the Blue Bank Resort. Great food and service.

A small, basic play ground was centrally located in the campground. There was no camp store for snacks or souvenirs. There was a “nature trail” on the outskirts of the campground. However, it was essentially a grass path following the drainage ditch parallel to the State Rt. 21. There was a section where you could fish and some sites were lakefront. You could fish off the back of your site. The Reelfoot Visitor Center is located a few miles down the road from the campground. They had a nice boardwalk trail that meanders through the swamp like areas of Reelfoot offering interesting and picturesque views of the cypress trees partially underwater. The visitor center also has eagles, owls, hawks, and other birds and reptiles on display. Additionally, there is an exhibit explaining the history of Reelfoot, including Native-American history. There was also a nice selection of souvenir items including artwork by local artists and stained glass type window hangings. There are also numerous picnic locations surrounding the lake.

The shower house building consisted of toilet facilities, showers, kitchen sink for cleaning dishes, and laundry machines. The facilities were not overly clean and a little outdated. Additionally, the bugs and mosquitos were a problem inside the building at the time of our stay (June). The showers offered a spacious area and hot water, yet there was no ledge for soap and only one hook. The toilet paper was super thin.  Overall, the showers were average at best.

What are your thoughts? Cancel reply 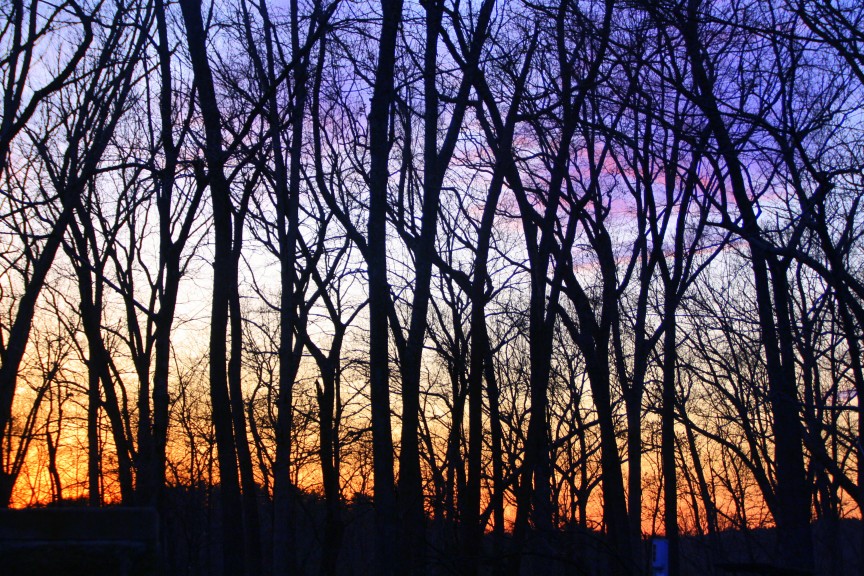 Can’t find what you are looking for?