PJ Hoffmaster State Park is located in central Michigan near Muskegon on Lake Michigan. The campground is open from April 3rd to October 18th. The campground consists of 293 sites, 8 of which are pull through sites. The nightly rate is $28 and $30 for sites that provide 50 amp electrical service. We stayed at site #216, which was across from the bathrooms and shower house. We found the sites to be a little too close for a state park. Sites provided electricity but no water. Water spigots were located randomly through the campground, however. There are no full hookup sites, but they do have a dumping station. A group camp section exists but it is not connected to the campground. In order to enter the park, one must have a Michigan Recreation Passport. For a non-resident it costs $9/daily. If you plan to camp for four or more days, I would suggest buying the annual pass for $31. If you own a motorhome and tow a car, be aware that you will have to buy passes for both the car and the motorhome. The campground office includes brochures and literature concerning the park and nearby attractions. However, there is no camp store. You can buy ice for $2 a bag. Firewood is stored in the shed across from the park office. It is $5.50 per bundle and cash only. You place your money in a bucket using the “honor system”. Right outside the gates of the park, locals sold fire by the wheelbarrow for a more reasonable price for what you got. The campground bans alcohol and they are pretty strict about it. Upon registration, you must sign a paper indicating you understand the alcohol policy. We did not experience any concerns with the rangers, however, I have read reviews on Google and Trip Advisor describing run ins with the rangers, some of who demanded to search coolers. I am troubled by this, as I am a 40-year-old adult who enjoys a beer or glass of wine around the campfire. If PJ Hoffmaster wants to be strict, how about they crack down on the kids who scream at the top of their lungs, or young children roaming the campgrounds with no adult supervision? More on this below.

Like many state parks in Michigan, PJ Hoffmaster is a beautiful park with mature trees, many of which were pine. Most of the sites were shaded though there were ones in the sun. We enjoyed the well-blazed trails to the beach and throughout the park. The park did not include elaborate flower gardens or displays, however, it was very naturesque, as you would expect from a state park.

Rating: (One to five lanterns with 5 being the highest)

If you are camping at PJ Hoffmaster, chances are you are there for Lake Michigan. Different paths in the campground lead to the beach. At the top of the dune, PJ Hoffmaster has situated porta potties for the convenience of their campers. Generally speaking, the porta potties were well maintained. The dunes as well as Lake Michigan were beautiful. You can get some amazing pictures of Lake Michigan. One trail we really enjoyed was the walk-a-mile trail located near the visitor center. The campground is down the road from the visitor center so you would need to drive there. We also liked the Homestead Trail, however, we did not walk the entire 3 miles of it. Some local attractions include Craig’s Cruisers, a go-kart, arcade, batting cage, etc. fun center as well as USS Silversides, a submarine museum. Adjacent to the state park is Oak Ridge Golf Course (18 holes). We prefer Holland State Park, about 45 minutes south, for it’s area attractions.  See our full review here.

We noticed there were a lot of tent campers at PJ Hoffmaster, many of which were families. As mentioned above, the significant number of young children that, in this case, were rather unruly made this trip not as relaxing as we had hoped. We have camped at many campgrounds with numerous families/children and normally have no concerns. Perhaps this was just a bad time.  The roads in the campground were paved lending itself to biking, walking, and running. The campground had a nice, modern playground. There were trails from the various sections of the campground that led to the playground area. There was also a large open field area that could be used for soccer/football, etc. For pet owners, the campground roads themselves offered a lot of walking space, not to mention the various trails in the campground and near the visitor center. Though the trails allowed pets, patrons could not bring their dogs to the beach. We did see some people who ignored that rule, however. We were disappointed that the campground did not have a fenced-in dog area. 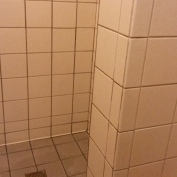 The bathrooms were modern and well maintained. The showers were individual rooms and provided plenty of space. Our one disappointment with the bathrooms was the number. For a campground with as many sites as Hoffmaster has, they only had three restroom/shower houses. During the holidays or weekends, I am sure the bathrooms are quite busy. This may be the reason that although these facilities are new, many of the doors to the stalls do not shut properly and you have to forcefully shut them and force your way out – not an easy task for children.

What are your thoughts? Cancel reply

Can’t find what you are looking for?